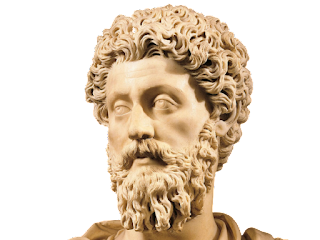 Marcus Aurelius ruled as Roman sovereign from 161 to 180 CE and is most popular as the remainder of the Five Good Emperors of Rome (following Nerva, Trajan, Hadrian, and Antoninus Pius) and as the creator of the philosophical work Meditations. Marcus Aurelius was trained in Greek from his early childhood and his work “Meditations” was also written in the same. He wrote “Meditations” in his late thirties and was never meant for publication. The Emperor gained the title of philosopher after his death.

The literal meaning of Stoicism is the endurance of pain or hardship without displaying feelings or complaints. Additionally, it is described as a member of the school of philosophy founded by Zeno of Athens. Stoicism is practiced and promoted by many great leaders like president Theodore Roosevelt. It is said that President Bill Clinton carries Meditations all the time with him.

The interesting thing about Stoicism is that most of the people who are practicing it are not aware of it. Taking the case of the author’s work Meditations, it was merely a journal. Later, people comprehended his work and inferred it in the line of Stoicism.

Even though Stoicism was a celebrated philosophy there is no work quite like Meditations in Greek or Latin literature. It is unique in the sense that author Marcus Aurellis address himself. This is the personal journal of one of the greatest emperors of the Roman Empire written during his reign and military campaigns. The fact was enough to grab my attention.

Readers who can dive deep enough will appreciate the philosophy expressed in poetic passages. At times, they may struggle to comprehend, but the Penguin Classic edition is supported with layman explanation-not sure about other publications.  It came in quite handy for me. People who reach out to this book expecting hardness and severity of stoic won’t be disappointed. In the first, a deep and hardwon acceptance of the cycle of birth, growth, and decay -revealing the beauty of every stage of life.

Nevertheless, the most sustained analogy to be encountered in the meditations is the discovery of Macrocosm and Microcosm. The microcosm–macrocosm relationship defines the similarity between the human being (the microcosm, i.e. little universe) and the universe as an entirety (the cosmos. Given this principle similarity, truths approximately the nature of the universe as an entirety may be induced from truths approximately human nature, and bad habit versa.

To sum up, Meditations is a profoundly thought-provoking book. It consists of twelve short books on the principles and philosophies of living a virtuous life, cherishing the present, and looking within. It is razor-sharp with its principles on purposeful actions and thoughts. This book has changed my views about life, the way I view people, problems, pain, and pleasure. It teaches patience, resilience, and the power of indifference.
Often it is our judgments about things that cause us distress. Remove the judgment and you are no longer harmed. Remove the thought “I am hurt” and the pain disappears. Meditations teach greatly on being of good virtue which comes down to your character and mentality. These are one of, if not the most intangible traits you have and you must refine them constantly. It was an insightful read and worth it investing your valuable time. Readers will gain a lot from this timeless classic.

View all posts by Tejashwi Sharan

This site uses Akismet to reduce spam. Learn how your comment data is processed.

My Goodreads Shelf for Book lovers

Help me take this blog to greater heights